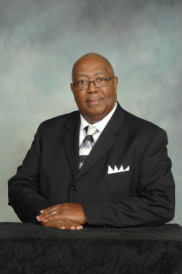 Pastor Arthur L. Powell was born in Valdosta, Georgia and later became a native of Decatur, Georgia. The Lord saved Rev. Powell in 1972 and called him to the Gospel Ministry in 1974. The first sermon he preached was taken from the books of Psalms 25:2 and the title was “Lord Let Me Not Be Ashamed".  Pastor Powell was ordained by the Thankful Baptist Church in 1979.

He has served as Pastor of the Travelers Rest Missionary Baptist Church, Morrow, Georgia, since 1986. By the grace of God, under Pastor Powell's leadership the congregation has grown to over 1500 members and over 40 ministries.

Pastor Powell had a vision of a new church. In 1992 the church purchased seven acres of land on Rex Road. Through many prayers, the dedication of a faithful building committee and a committed church family, Pastor Powell's visions became a reality when the new building, with an educational wing, was built.

In July 1999, Pastor Powell led the congregation as they marched in the new edifice. June 16, 2004, through much faith the church opened a Christian Bookstore (Genesis Christian Bookstore). In February 2009, Pastor Powell’s vision of a Community Life Center came to past when the Church held the Grand Opening Ceremony inside the Family Life Center.

Pastor Powell attended Morehouse College and graduated from Dekalb College and Carver Bible College. Pastor Powell is the past President of the Association of Christian Ministers of Clayton County with a membership of 10,000. He is a life time member of the Clayton County NAACP. He is also a member of the National Baptist Convention, USA, Inc.  Pastor is the past Moderator of The Hopewell Baptist Association.

Rev. Powell and First Lady Powell have one daughter, Adrian. Pastor Powell currently resides in the Henry County area with his wife, Dianne.

Shake Rag Baptist Church was organized under a Brush Arbor in Clayton County under the leadership of the late Reverend L.O. Kelly. Reverend Kelly ordained the first Deacons:  Lee Butler, Demp Kemp and Lee Chancey as Secretary.  Mothers Odie Douglas and Ollie Clark were also a part of that faithful group that worshipped together for nearly nine years in a Justice of the Peace building. Reverend Kelly at that time felt he had accomplished what God wanted him to do. In 1925, he resigned and requested that the members consider a young energetic Minister by the name of Reverend E.T. Smith as their Pastor.


Reverend Smith was called as Pastor of Shake Rag in May of 1925. Under Reverend Smith’s leadership and guidance the membership increased. Reverend Smith informed the members of a vision that he had which was to have a church that they could call their own. After many prayers, two acres of land was purchased on Joy Lake Road. Upon this land, a wooden frame church was built. It was decided among the members that they needed a new name for the church. Travelers Rest Missionary Baptist Church was the chosen name. Membership continued to increase and services were held mornings and evenings. More Deacons were added to the membership (Paul Mathis, James Collier and Phil Sharpe, Sr.)


Reverend Smith served 60 years; he fought a good fight and kept the faith. In May 1985, Reverend Smith was voted Pastor Emeritus, where he served until his death on March 30, 1988. During the times that Reverend Smith was unable to serve as Pastor, due to illness, Reverend James Hamilton served as Associate Pastor of Travelers Rest, until 1986.


In 1987, we started having worship service every Sunday. In honor of Reverend Powell’s first anniversary, the A.L.P. Ensumble was formed.  A Trustee Board and Administrative Staff were formed to help carry on the business of the church. During this timeframe, Reverend Powell suggested that the Children’s Choir carry the name Samuel Murphy Senior Youth Choir in honor of the late Deacon Samuel Murphy, Sr., who had a great love and concern for children. The congregation unanimously agreed.


In October 1989, with the work of Mother Emma Heard, Sis Margie James and Deacon A.J. Mathis, a “Food Bank” was organized to serve the church.


In 1990, Reverend Powell named the Nurses Guild in honor of the late Martha Shockley.


In 1996, Reverend Arthur L. Powell,   Dea. Willie A. Heard, Chairman of Deacons, Mother Mary Smith and Deacon A.J. Mathis turned the first spade of earth at 2112 Rex Road, which signaled the erection of a new church. We began working on the present edifice. Through the vision of our Pastor, the faith of the membership, and by the spirit of God, we marched into our new church on July 4, 1999. Dedication Services were held July 6-9, 1999.


On Sunday, September 30, 2007 we broke ground for our new Family Life Center. In January 2008 construction for the 25,000 square feet Family Life Center began. This is a center that will be of service to the community and church for years to come. On Sunday, April 19, 2009 we celebrated the Grand Opening of the Travelers Rest Missionary Baptist Church Family Life Center.


“We have come this far by Faith,” as we celebrated our 1001st Church Anniversary in 2017, it is with great joy and pride that we give thanks to God, for our past leaders, the late Rev. L.O. Kelly and the late Rev. E.T. Smith, to all the forerunners of our church and to our most honorable Pastor, Reverend Arthur L. Powell for his continued dedication, leadership and spiritual guidance.